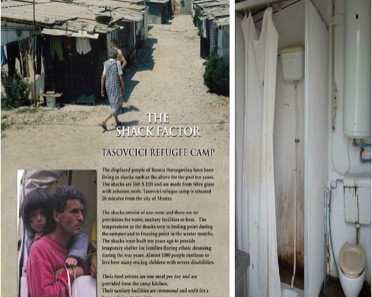 Rebuild  for Bosnia  was  established  as a direct response to the intensity of suffering Patricia Keane  witnessed  when  she  first visited  Bosnia Herzegovina in 1998, three years  after  the  war, now classified as theworst since World War II ceased.

What  was  left  in its  wake  was  450,000 permanently  displaced  people  who   still continue  to  endure  the  inhumane  living conditions of huts and shacks in collective centres for refugees and who exist on one meal  a day from the camp’s soup kitchen.

Without  the  help  of non government organisations  like  Rebuild for Bosnia the displaced people will never be in a position to build new homes as current unemployment rates stand at  60%.

To  date  Bosnia Herzegovina  has no welfare structures in place to alleviate suffering.

Rebuild  for  Bosnia  has  housed  over 1000 people to date and provides living allowances and home care services for  the most  vulnerable  and marginalised.